What can be more challenging than trying to figure out a model for a new industry? And we don’t even have to put the caveat: in these new times, that are unfolding before us. Is this an opportunity for an emerging industry to start thinking from point 0 ( or point 1 or 2…) about a model that will offer sustainability and the ability to make a profit for its creators?
There are definitely difficulties in the XR field- starting with the technology that is constantly developing and sometimes these changes halt consumer adoption of hardware. The creatives enter the field when they know the possibilities offered by technology, followed by the business-part who will have to figure out where the money will come from.

So, how is the business model looking? And what funding is available for creators?
The “Handbook for Immersive Producers”, made by French Immersion in partnership with Kaleidoscope, shows the picture of main players in the field, and the possibilities they offer, mainly in US.
The study has been written by Ana Brzezińska Curator and Producer at Kaleidoscope in collaboration and Emma Buttin, VR, TV & New Media Officer at the Cultural Services of the French Embassy in the U.S.

But, firstly, how the pandemic affected creators?
As in other fields, creators reported both losing and gaining audiences (50/50%), shows the report.
An important element was that moving to online platforms was a priority for most creators, as the location-based entertainment (LBE) segment was affected. LBE had to postpone events. During the pandemic, creators and studios increased their search for new partners and investors.
Many players foresee some new trends such as: social XR (as VR helps people to connect), accessible mobile and web-based experiences will become more popular.
As B2C models require mass adoption of headsets, in the short term, institutional and educational adoption will grow.

The search for funding is always complicated and time-consuming, but the good news is that companies started to invest. Most of the telecoms invest mainly in local studios, with amounts ranging from 5K to 20K Euro.
Technological companies also invest in immersive content to boost adoption speed and/or advertise their products. And most of them are supporting specific content, according to their target audiences.
For example, Facebook-owned, Oculus (being both hardware, but also distribution platform) is interested in original content.

When it comes to distribution, for online or offline platforms, experts interviewed in the report make some recommendations such as: drop regular episodes – this can extend the lifetime of the experience; “think beyond headset” – meaning more content for mobile and webXR experiences – where sometimes distribution appears to be brand-based or downloading the app.
Experts admit that transmedia projects are hard-to-be-financed, as everybody is financing either the game or VR or film. But, maybe in the future, the landscape will change.

Overall, the message of the report seems to be an optimistic one! In the future, we will witness a quicker and wider XR adoption, a growing need for new types of content, and a more diverse market with new business opportunities.
Adoption will be stimulated by new investments within education, training, healthcare and enterprise. And as trends, the report mentions, event-based content, live or real-time components, as well as easily-accessible AR experiences.
When it comes to culture and entertainment, experts mention the demand for a more social approach such as social XR, and multiplayer experiences.

If you are interested in more info please visit web page of The Cultural Services of the French Embassy in the U.S. 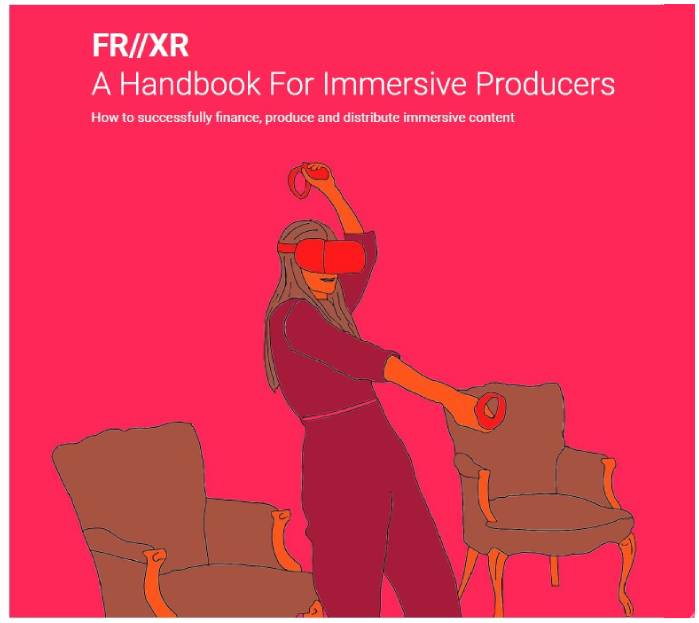 “FR//XR: A HANDBOOK FOR IMMERSIVE PRODUCERS” was launched by the founders of the French Immersion program (the Cultural Services of the French Embassy in the USA, CNC, Institut français, UniFrance and FACE Foundation), FR//XR is an initiative to determine how to best fund and distribute immersive experiences, including the impact of the COVID-19 pandemic.

The Handbook for Immersive Producers includes:

Kaleidoscope – is an immersive production studio playing a central role in the artistic renaissance of virtual reality. Partnering with Museum of Other Realities, Kaleidoscope has been on the bleeding edge of virtual event production,
co-creating a number of immersive gatherings including the biggest VR exhibition in virtual reality at Cannes XR/Marché du Film, and a first virtual fashion show with RYOT/Verizon Media.
Kaleidoscope has also helped creators raise more than $34MM for original projects including the first seven-figure deal for a VR film at Sundance.

The Cultural Services of the French Embassy in US – promotes the best of French arts, literature, cinema, digital innovation, language, and higher education across the US.
Based in New York City, Washington D.C., and eight other cities across the country, the Cultural Services brings artists, authors, intellectuals, and innovators to cities nationwide.

FACE Foundation – is a nonprofit organization dedicated to supporting French-American relations through innovative cultural and educational projects. With additional corporate, foundation, and individual support, FACE administers grant programs in the performing and visual arts, cinema, translation, and secondary and higher education, while providing financial sponsorship to French-American festival and other cultural initiatives.

Centre national du cinéma et de l’image animée (CNC) – is a public administrative organization, set up as a separate and financially independent entity which comes under the authority of the French ministry of culture and communication.
Its principal missions are regulatory: support for the film, broadcast, video, video games, immersive productions and technical industries; promotion of film and television for distribution to all audiences and preservation and development of the film heritage.

UniFrance is based in Paris and also has representatives from New York, Beijing and Southeast Asia. Its membership brings together around 1,000 French producers, filmmaking talents, agents and sales companies, which are working together to promote French film among foreign audiences, industry executives and media. UniFrance supports, as long as feature and short films, the international promotion of immersive projects and creators throughout the world.

The Institut français is a public institution under the aegis of the French Ministry for Europe and Foreign Affairs and of the Ministry of Culture responsible for French cultural actions abroad.
Its initiatives cover various artistic fields, intellectual exchanges, cultural and social innovation, and linguistic cooperation. Throughout the world, it promotes the French language, as well as the mobility of artworks, artists and ideas, and thus works to foster cultural understanding.